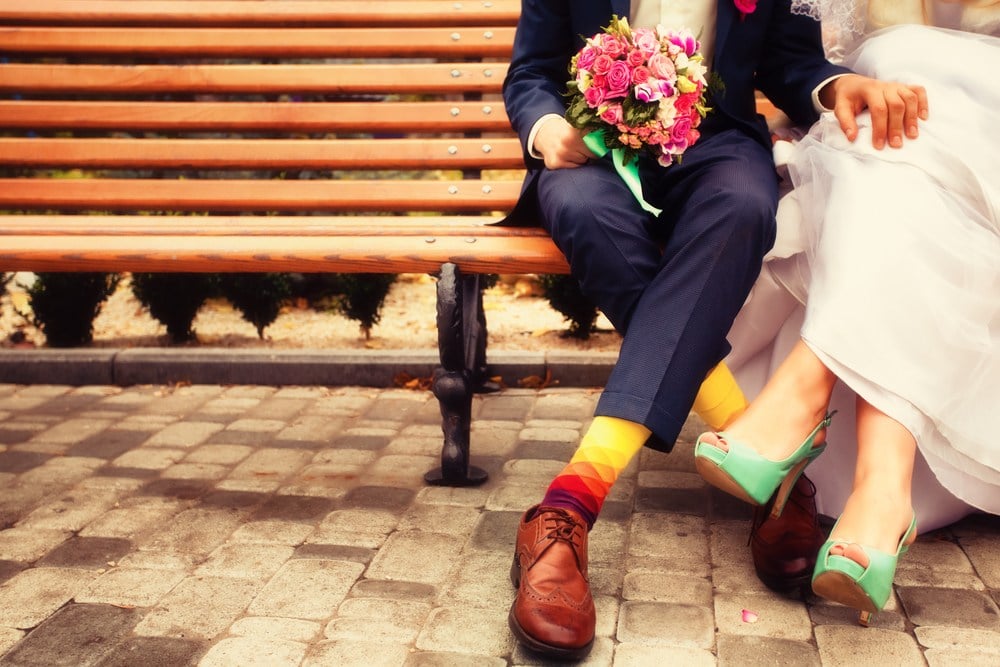 Weddings – they’re great, aren’t they? So much fun, so much love. These days, weddings are highly personalised to the people they’re celebrating – but even when your special day is “uniquely yours”, there are still traditions, myths and rituals that band all weddings together – especially during the planning process. Today, we’re going to debunk some of those myths for you.

Yeah, it is! Weddings are an incredibly personal event that celebrates the love of two people, and that’s great. However, it doesn’t put you on a pedestal far, far above the people around you, especially not your loved ones who have supported you during the engagement process. Sometimes you’ll receive unwanted advice or help – at least consider their options (or don’t, but be polite about it) lest you become the biggest bridezilla/groomzilla in town, spreading fear and annoyance.

2. The bride and groom’s parties should be of equal numbers.

It’s aesthetically pleasing in photographs to know that there are two/five/eleven bridesmaids and two/five/eleven groomsmen, creating a nice symmetrical appearance in photos. However, social circles are fluid and it may just so happen that you have fewer/more close friends than your partner. Don’t feel the pressure to fill/cull your crew just for the sake of symmetry – as long as your loved ones are there, that’s all that matters!

3. We went to their wedding – they have to come to ours!

It might seem from the outset that it’s a little bit selfish and rude to not invite someone to your wedding because you attended their/their daughter’s/their cousin’s nuptials. However, there’s a point where you have to draw the line for whatever reasons you may have, be they budgetary or just because you would like an intimate party for your special day. If someone that is not on the invite list has assumed they’re invited, just be honest with them. Say that due to space or budget constraints, you weren’t able to include them. People are generally reasonable, they’ll understand.

4. The engagement should be one year long

Wedding “rules” such as the year-long engagement are arbitrary and outdated. The engagement period is not like a gestation period, things will not go wrong if you speed things up or slow them down. Do what feels right for you – if you’ve been with your partner for a long time and your incomes are stable, it could suit you better to have a shorter engagement. Likewise, if you have other priorities in mind, it may suit you best to postpone the vows until you’ve settled down a bit.

5. Book now or regret it later

If you have plenty of time and availability to plan ahead, go for it. There’s no substitute for peace of mind. However, if you live life on the edge and are willing to take risks at a last-minute wedding, you’ve got a chance of landing some pretty good deals for booking at late notice. Florists, photographers and other suppliers with gaps in their calendar are more likely to give discounts than risk not getting a booking at all, which can only mean good things for you and your party.

6. You need to use your venue’s suppliers

While your venue is everything you’ve ever wanted, they may try to coax you into going with their list of recommended suppliers to deck the halls out. Don’t feel pressured to use this. If your venue is one that provides food and drink – such as a hotel  - it makes sense to go with them for catering and you may get a better deal that way. But for the more personal supplies such as flowers, decorations and entertainment, be assertive in wanting to choose your own suppliers – a little bit of research goes a long way.

7. Hiring your friends and family is not the same as hiring a professional

Personalising your wedding with DIY centerpieces, name cards and other decorations seems like a fun idea at first, but asking your loved ones to sweat it out with hot glue guns doesn’t always end up being a cost-effective option, especially considering how much time ends up going into the production process. And unless you have contacts, the cost of stationery and other supplies can end up costing more time, money and sanity than it would to simply hire a professional to do it for you.

The same goes for getting your loved ones to act as event planners, photographers, et cetera. If they’re wracking their brains making sure the day goes well, they may end up not being able to participate in it themselves!